So, first up, for class number two, we have to bring a light blue cake, iced to our very bestest ability. It took me forever because I was using the tiny little 8″ angled spatula that I had in my drawer, girlfriend gots to go get herself a 13″ spatula, cos DANG. This part took the longest!

How nice, you can’t even tell that there was a point at which my darling Nicole was eating my cooling cake and then started bawling and ran to tell on herself. Baby has a conscience. Finally. 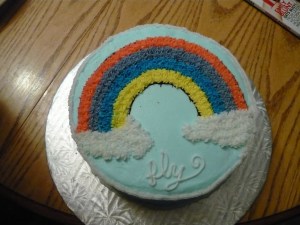 Will you please pretend you can’t see the black line. We spent so much time practicing technique we had only ten minutes left to actually decorate our cakes. It’s kinda crummy but for fifteen minutes I’m proud. And I learned some new techniques, and I feel confident that I could turn any sheet or circle cake into a character cake now. Cos I learned TRACING. It’s like art all over again.

Here the colors are a little more true-to-tone on the rainbow. You can also see the reason the pictures were all taken at night. Well, the first one was because I didn’t finish icing the cake until it was already getting dark outside. But the reason I couldn’t wait til the next morning to take a picture of the cake is because Chris was WAITING. For like, two weeks. Because we didn’t make a cake last week, we just took notes. Somebody is gonna get FAT off this course. Or both of us, maybe. There is like a brick of lard and a pound of icing sugar in that cake. In the icing alone. Ew. Ewwww. Tastes like storebought. EWWWWW. But whatevs, it’s just for the class, and then I shall do some playing.
See if you can also spot the following in that picture.
a) a creepy hairy foot. b) Evidence that Chris doesn’t clean up after dinner when I’m not home to supervise. c) a “Safeway Bingo” card. d) a santoku (santuko?) knife about to be used as a cake cutting and serving utensil.
Today I am making Apple Butter, inspired by (but not exactly following the recipe of, because I’m such a rebel) Beckie over at Infarrantly Creative. Which reminds me I need to go ask dictionary.com what infarrantly means because I actually don’t know that one and I’m kind of a word junkie. Anyways, I’m snorting apple-flavored oxygen like an addict. My house smells so delicious. MAKE APPLE BUTTER. JUST TO MAKE YOUR HOUSE SMELL GOOD. And then invite everyone over and they will think you are Suzie Homemaker because your house smells so good but it’s actually sick-easy. Or at least if you have an apple peeler/corer/slicer. Which I do. Envy me, it was a thriftstore find.

3 thoughts on “have a little class”