Yes, indeed, I have been up to things. They are even Almost Productive Things. No, no, not cleaning my house. What are you, crazy? I’ve been maintaining a steady level of mediocrity in my house. Good enough that it’s hygienic, bad enough that it would be embarrassing if a friend popped over, except friends did pop over and I was too busy shiffling around from sewing machine to serger and back again from under a pile of fabric scraps to be embarrassed. 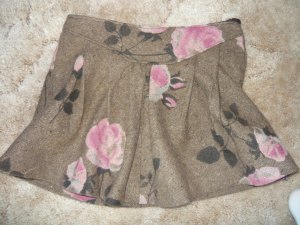 So I created this lovely from an Ottobre pattern. It is, of course, too big. Also, the perfect front pleats got a bit skewed when I sewed it. So then I realized I had enough fabric left to piece together another slightly smaller skirt. Which is amazing because I started off with a woman’s calf-length skirt, here. The new skirt is, of course, a bit too small. Or at least it’s a bit tight. I was frustrated at the time though so I’ll go back and press and reassess. The pleats on the second skirt are perfect though. I didn’t photograph the second skirt. 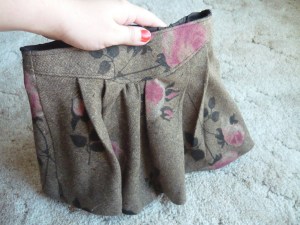 I also took a pair of women’s black linen pants and drafted up a pattern for elastic waist linen pants for Nicole. They look nice but I’m going to make another pair a little bigger because the purpose was to wind up with pants she could take off and put on easily herself, and these are a little too snug for that. You like how two year olds make fantastic models? I even gave her a candy to unwrap and figured that would have her standing still. No, no it did not. 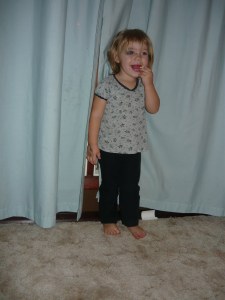 No, I haven’t been beating her. She took a trip into the bathroom and came out like this, a la mascara. I couldn’t even get mad because I was too busy trying not to laugh my butt off when she skulked out of the bathroom looking fierce, narrowed her eyes at me mischievously, and went “ROAAAAAAARRRRR!” At least if she had declared herself pretty as per norm I could have scolded. But today she was a monster, which gave me the giggles.
I also spent hours putting together a christmas dress for nicole in black velvet with red accents, but then it was too small and I ate chocolate and now it’s on the table waiting to be salvaged into a skirt. Daddy picked out the cutest little black sunday boots for her, suede with fur and pompoms and the like. I think it’s cute how strong an opinion and loose a wallet her daddy has when it comes to her winter sunday gear. Still looking for the perfect winter coat, may need to make it. Will be red, or black faux-fur with animal-print accents.

4 thoughts on “I’ve been up to things”