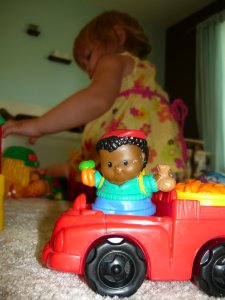 Grab your lunches and run! There’s a giant on the loose!!! Thankfully for me, my DD can occasionally fend for herself on the entertainment front. I like to organize toys into containers, like Little People Zoo (this), Kitchen Stuff, MegaBlocks, etc. Then I make the container dissapear for a while, and then I bring it out like “TADAA!” and it’s magically entertaining again, where it would have been eternally dull had it been available all along. Kids are funny that way… (she says hypocritically, being equally guilty of getting excited over my own Stuff when I ‘find it back’ from storage somewhere.)
So, aside from going off on tangents, what have I been up to in the last two sun-drenched days? Well, I did lots yesterday, and then pretty much curled up in the fetal position on the couch watching TLC today. I have a cold, which I can handle, but then I was having some stomach cramps so I totally wimped out. 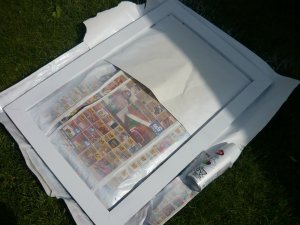 I made out with my spraypaint for a while. I’m pretty sure that’s what you do on dates, right? And this must have been a date because there were nonliteral sparks like crazy. This baby is a glossy white. Yummm. This grungy frame from a homemade bulletin board that was too ugly for my parents not to pass onto me is now The Shit. 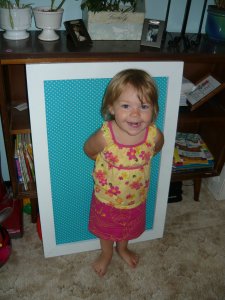 And then of course, I covered the bulletin board itself with the crispest, freshest thing I could find in my stash. Originally this was supposed to be for me, but since I could not resist using that particular fabric, this will go in DD’s room now, since it will look a little ‘HEY LOOK AT ME. I DONT MATCH BUT I’M HANGING HERE JUST FOR THE SAKE OF HANGING HERE!’ anywhere else. Speaking of DD, she was not supposed to be in this shot, but she got jealous of the bulletin board (admit it, you wish you were as fly as that board, too. i know i do.) So she jumped in front of it and yelled CHEESE! That skirt, by the way, was recieved in a swap. 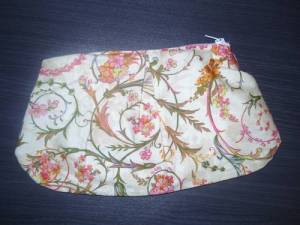 Speaking of swaps… I made this little cutie for a swap and then totally forgot to take pictures. So these are taken by the recipient, not my poor scattered self. This is my first bag! From no pattern at all, just kinda whipped it out! I’m sure had I actually planned it out I would have had a little more ‘speed’ and a little less ‘seam ripper’, but whatevs. This is my idea of crazy and adventurous, okay? Like white-water rafting is for people who leave thier neighbourhoods once in a while. (see the cute little box pleat, by the way? This this is puffy and pleated and all that jazz. and I used almost the last of that pretty fabric. that’s SACRIFICE, people.) 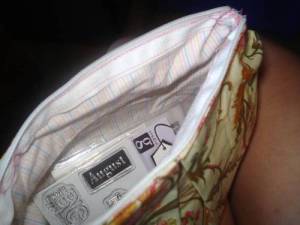 And the inside, with some goodies. Because she sent me some, plus this ‘clutch’ turned out more like a ‘makeup bag’ for size, so I had to compensate. lol.

Oh, and if you’re a regular reader and thinking to yourself, “wow, isn’t Lor just doing so great with the coffee thing, I can’t believe she drank lemonade instead of coffee yesterday.” Well, let me tell you, that only lasted until the evening. When I had to be civil company to my husband, too, it got to be too much for me. I drank half a pot. Bite me.

2 thoughts on “RUN FOR YOUR LIFE!”